Why Big City Blocks are a Runners’ Garden

Posted on April 7, 2018 | Comments Off on Why Big City Blocks are a Runners’ Garden

We were out running the other day—a gloriously beautiful and warm morning though always fleeting in Utah—and listening to morning radio the other day—many a runners’ good friend—when we heard a DJ and call-in guest discuss Salt Lake City’s “huge” city blocks and how they were detriment to city’s pedestrian-friendly vibe. At first, I started to run faster, subconsciously without realizing, then I realized, got tired, and paused for a moment altogether before setting off again at my regular pace.

Ok, first of all, yes, Salt Lake City has big city blocks. But, no, I don’t understand how big city blocks create a barrier to walking or running. I think what the person meant to say was that it’s intimidating and that it’s a psychological barrier. That’s not exactly what they said, but I’m not sure what else they could have meant. Longer city blocks make for fewer intersections and forced stops. Aside from walking and running for the activity itself, longer blocks should also mean more densely populated services. Much of Salt Lake City is underrated for its walkability.

I’ve been told that our city blocks are almost the exact same size as the blocks in New York City. But, of course, the sidewalks are a lot less crowded here. And while we may not have Central Park, more of our individual streets have greenspace in the median and more trees overhead. Then, there’s Liberty Park and Pioneer Park as well.

I know there’s a huge and gorgeous bike trail in Sugarhouse, Millcreek, Murray, South Jordan, and much of the rest of the Salt Lake Valley, but here’s a shout-out to the city center, its walkability, and as a runner’s paradise in general.

Comments Off on Why Big City Blocks are a Runners’ Garden

How Do People Find Run Events in Utah?

Posted on March 7, 2018 | Comments Off on How Do People Find Run Events in Utah?

People learn about Run Events in Utah in a bunch of different ways. They hear about it from friends and neighbors, from online communities, from local newspapers and bulletin boards. But even as we live in this modern age of information and digital technologies, yard signs are another common way that people learn about running events in their community. Take this example from Run SLC Series. 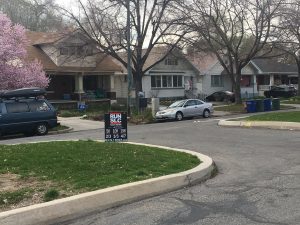 Especially for those who may otherwise see running as a solitary event, or maybe someone who is looking for that serendipitous moment to take their running habit or physical fitness to the next level. In Salt Lake City, in Provo, in Ogden, and other population centers, this type of low-tech marketing solution can be surprisingly effective. 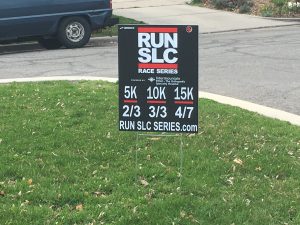 Of course, there are virtually an endless number of ways that people hear about Run Events in Utah. Tell us about how you first got involved with a running event in Utah, or just tell us about your favorite Utah running moment. We want to serve as an amplier for getting the word out.

Comments Off on How Do People Find Run Events in Utah?

We want Utah Run Events to help people take their passion for running to the next level—or maybe just a different level. Sure, we want to deliver a reliable calendar of running events in Utah, but we also to help people find the groups and events that fit their personality and approach to running.

Do you think some friendly competition is just what you need to take your running to the next level? Are you primarily interested in parlaying your existing exercise routine into an opportunity to meet people and make new friends? Do you have a soft spot for charities and social causes, and you’re looking for ways to do good for others as you also do good for yourself?

Your favorite Utah Run Event is likely going to be different based on how you answer these questions. Choices will have to be made. There are hundreds of events in the state each year. No matter how much you love running and no matter how good a shape you’re in, you can’t do them all.

More to this point, the state’s geography is a blessing and a curse. The incredible geological diversity makes for an incredible amount of variety. From the Great Salt Lake to Wasatch Front to the Uinta Mountains to the desert, canyons, and arches of southern Utah, you can run against different natural backdrops and never have them grow old. But, again, you likely can’t attend an event in Ogden and one in St. George on the same weekend.

For all these reasons, we wanted to build a Utah-centric website for runners and run events. Tell us about your favorite running event or Utah run experience, and we’ll look to share this information with our audience as we construct this site.

Comments Off on About Utah Run Events